How to Do Nothing by Jenny Odell, The Believer, June/July 2019

There There by Tommy Orange, San Francisco Chronicle, 6/6/18

Anatomy of a Miracle by Jonathan Miles, Los Angeles Review of Books, 3/29/18

Eternal Life by Dara Horn and How to Stop Time by Matt Haig, Los Angeles Review of Books, 2/10/18

Since December 2018, I’ve been a reviewer for Kirkus, contributing unsigned, bi-weekly reviews of upcoming fiction releases.

The New York Times for Kids 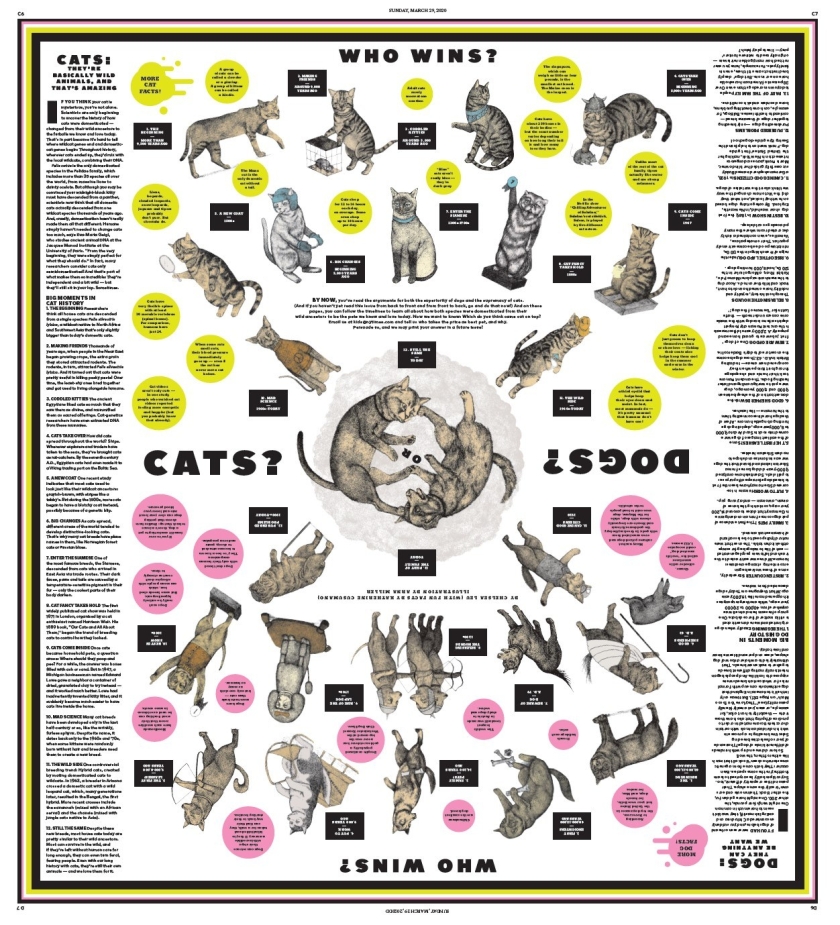 Cats vs. Dogs: For this very special issue, I charted out how dogs and cats, over thousands of years, have transformed from feral animals to our adorable best friends.

“The Body Issue“: The December 2019 section included a four-page, nearly life-sized spread dedicated to how kids’ bodies work, annotated with blurbs that Nick St. Fleur and I wrote. (Look for the part where I explain what sex and spontaneous erections are to children!) I also wrote about parts of the brain on page 2 (“What’s Going On in Your Head”).

“So Many Phobias“: For the October 2019 section (Halloween-themed!), I wrote a story cataloging more than 40 phobias, both strange and common.

“CRISPR Will Change the World“: For the November 2017 kids section, I wrote a cover-story explainer of how CRISPR works, complete with a prediction matrix and a how-to guide.

“Why I Hide from Writerly Dread in the Pages of Self-Help,” Literary Hub

“‘Circe’ Shows Us How Storytelling Is Power—And How That Power Can Be Seized,” Electric Literature

“Looking Up,” University of Chicago Magazine: An essay in which I wax sentimental about the summer I spent hunting gargoyles at my alma mater.

“Know Your Meat—and Bugs. Introducing the Periodic Table of Protein.” For WIRED’s August 2016 food issue, I trawled through the USDA’s nutritional database to create a full-spread periodic table of proteins, categorizing everything from Nutella to Soylent by protein content. (Designed by Keirnan Monaghan and Theo Vamvounakis.)

“Built to Blast: Behind the Scenes as NASA Tests the Most Powerful Rocket Ever,” December 2017. A photo essay for which French photographer Vincent Fournier got exclusive access to take pictures of the Space Launch System, the rocket NASA is building to eventually take people to Mars (they hope). I wrote all the words.

“Meet the Heroes Fueling the New American Space Boom,” November 2016. For WIRED’s Obama-edited issue, I interviewed seven inspiring, diverse workers in the new space industry about their jobs and what they see as the future of spaceflight. Photographed by Dan Winters.

What’s Inside: This print magazine column delves into the chemistry of everyday objects including Tide Pens, Scotch Magic Tape, and lithium-ion batteries.